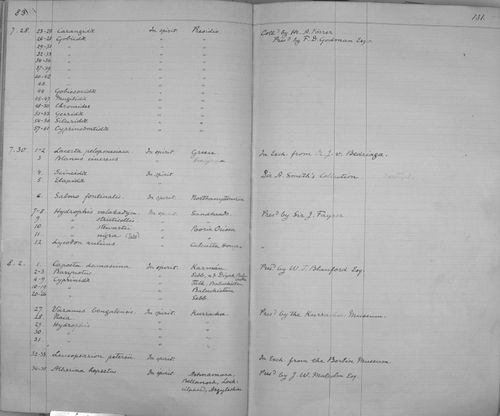 Diagnosis. Oxynoemacheilus tigris is distinguished from O. ercisianus, O. hazarensis and O. kaynaki by having a long and high dorsal adipose crest with a whitish margin, reaching beyond the vertical through the anal-fin origin, usually below the last dorsal-fin rays when folded down (vs. no or a short dorsal-adipose crest, without white margin, on the caudal peduncle not reaching to the vertical through the anal-fin base), and 10 – 16 bold, narrow, regularly shaped bars, very prominent on the caudal peduncle (a mottled or marmorate flank pattern or the flank with large, irregularly shaped and narrowly spaced dark-brown bars or blotches), two bold, black spots at the caudal-fin base in most individuals (vs. no spots), and many isolated, deeply embedded scales on the flank (vs. no scales in O. ercisianus, scales restricted to the caudal peduncle in O. hazarensis).

Remarks. Oxynoemacheilus tigris was described from the Qweik River, which was a tributary of the western Euphrates until the early Holocene, when it became isolated due to the desiccation of its connection to the Euphrates (Hamidan et al. 2014). While the Qweik and its tributaries have dried out completely in Syria, there are still headwaters in the Turkish part of the catchment (Hamidan et al. 2014). In these tributaries, O. tigris is found together with O. argyrogramma, a species also known from the western part of the Euphrates, including the Merziman River (Freyhof & Özuluğ 2017). As there is no more water in the Syrian part of the Qweik River, O. tigris must be considered as being extirpated in Syria. While we first identified the barred Oxynoemacheilus from the Merziman River as O. tigris, it turned out to form a separate molecular group in our COI barcode database (Fig. 1). Our molecular data place O. tigris from the Qweik within Oxynoemacheilus namiri (Fig. 1), whereas the individuals sequenced from the Merziman River in the Euphrates drainage are placed as a separate cluster in the species group discussed in this study, differentiated from O. namiri by a minimum K 2 P distance of 9.3 %. Oxynoemacheilus namiri is widespread in the Orontes River, which is situated adjacent to the Qweik in the west. Even through O. tigris is well distinguished from O. namiri, we were not able to find differences between the populations of O. tigris studied from the Qweik and the Merziman (Euphrates). We postulate that the Qweik population of O. tigris has completely or partly lost their own mitochondria due to introgressive hybridisation with invasive O. namiri from the Orontes. As O. namiri is absent from the Euphrates and the Qweik but widespread all over the Orontes and the coastal streams in Syria, we find this scenario more likely than vice versa. The recent biogeographical connection between the Orontes and the Qweik was already discussed by Hamidan et al. (2014). These authors pointed on the occurrence of Pseudophoxinus zeregi (Leuciscidae) known from both rivers, while this species is absent in the Euphrates drainage. Obviously, a recent connection between the Orontes and the Qweik allowed P. zeregi to invade and establish in the Qweik from the Orontes. Similar to O. namiri, P. zeregi is very widespread in the Orontes and in the coastal streams in Syria. Therefore this direction of the invasion seems to be more likely than the invasion from the Qweik into the Orontes. Oxynoemacheilus namiri might also have spread through this connection from the Orontes to the Qweik, and we speculate that it may have hybridised with O. tigris leading to introgressed O. tigris individuals with mtDNA of O. namiri. We did not have the opportunity to test this case with nuclear molecular marker, but encourage future studies to do so. Based on DNA barcoding it is well separated from all other species in the O. ercisianus group, and by a minimum K 2 P distance of 4.2 % to O. kaynaki. It is also supported by the PTP approach and by the mPTP delimitation as a distinct entity. Other species of Oxynoemacheilus in the Euphrates are not closely related to O. tigris. It is distinguished from O. araxensis, O. argyrogramma, O. bergianus, O. euphraticus, and O. samanticus by having a long dorsal adipose crest on the caudal peduncle reaching beyond the vertical through the anal-fin origin, usually below the last dorsalfin rays when folded down (vs. no or a short dorsal-adipose crest on the caudal peduncle), 10 – 16 bold, narrow bars on the flank, very prominent on the caudal peduncle (vs. a mottled flank pattern or the flank with large, irregularly shaped and narrowly spaced dark-brown bars or blotches), an incomplete lateral line (vs. complete), no suborbital groove in the male (vs. present), a slightly emarginate or almost truncate caudal fin (vs. deeply emarginate in all species except O. araxensis), and two black spots at the caudal-fin base (vs. no bold black spots in all species except in O. argyrogramma and O. euphraticus). Oxynoemacheilus tigris is distinguished from O. paucilepis by having an incomplete lateral line (vs. complete), and a long dorsal adipose crest on the caudal peduncle (vs. no crest).

Distribution. Oxynoemacheilus tigris was found in a headwater stream of the Qweik and in the Merziman drainage, flowing to the Euphrates at the Birecik reservoir.