A PhD student from India looking at the potential for social networking sites to provide valuable biodiversity data has been selected as a winner of the GBIF Young Researchers Award. 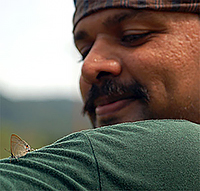 Vijay Barve is a research fellow at the Foundation for Revitalisation of Local Health Traditions (FRLHT) in Bangalore, and a PhD candidate at the University of Kansas, United States. He is one of the two 2014 winners of the €4,000 award, granted annually to graduate students demonstrating research innovation and originality, the potential for significant contributions to biodiversity science, and the creative use of data published through GBIF.

Vijay Barve’s project will investigate whether images shared on sites such as Flickr, Facebook and Picasaweb may be untapped sources of very large volumes of photo-vouchered species occurrence data, especially in developing countries.

The project will test this potential using two case studies, the first involving all bird images shared on Flickr, and the second looking at 85 species of swallowtail butterflies in India, deploying experts and enthusiasts based on a crowd-sourcing approach to test the validity of the species identifications.

The data derived from social networking sites will be compared with existing GBIF-mediated data on the same species groups, in terms of volumes, seasonality and sampling completeness across regions. The new data derived from photographs will be converted to GBIF-compliant formats and published to the network using the GBIF Integrated Publishing Toolkit (IPT).

Responding to his selection as a GBIF Young Researchers Award Winner, Vijay Barve said: “I am excited to use this opportunity to further my explorations with harvesting and utilizing biodiversity occurrence records from social networking sites and make them available for mainstream biodiversity research.”

“I am thankful to all my colleagues and mentors for all the encouragement and support I have received for this project.”

Vijay Barve’s academic adviser A. Townsend Peterson, University Distinguished Professor at the University of Kansas Biodiversity Institute, commented: “Vijay’s work explores a qualitatively new source of biodiversity data that has the potential to enrich current biodiversity knowledge considerably. Although this data resource will be fruitful only for certain groups, the data that will result are immediately ‘vouchered,’ such that these data are of high quality, and quite numerous as well.

“This work reflects thinking that is genuinely ‘out of the box’, not just as regards the data source, but also in the crowd-sourcing solutions for improving and enabling the data."

Vijay Barve’s home institution in Bangalore is among the national GBIF Nodes for India. Suma Tagadur Sureshchandra, GBIF Node Manager (medicinal plants) at FRLHT commented: “I am delighted to hear this good news. We look forward to learn applications of this research for mobilizing local biodiversity data from students and teachers, and for popularizing biodiversity in school education, especially on traditional knowledge and bio-resources.”

The award winner’s mentor and former director at FRLHT, D.K. Ved, commented: ”Congratulations to Vijay Barve for receiving this award. I am sure this innovative approach for undertaking research on biodiversity occurrence records using citizen science has a lot of potential for GIS applications, including guiding informed conservation action for medicinal plant species of high conservation concern. Good luck!”

The other winner of the 2014 GBIF Young Researchers Award is Caoimhe Marshall from Ireland.