Even though Ukraine does not yet formally participate in GBIF as a member government, a vibrant national data-publishing community has demonstrated an unwavering commitment to sharing open biodiversity data from their institutions, in defiance of the immense challenges and tragedy brought on by the war.

Since 1 January 2022, Ukrainian-based institutions have added more than 170,000 new species occurrence records, a 34 per cent increase, adding data coverage for 5,433 more species (an increase of 44 per cent). The Ukrainian Nature Conservation Group (UNCG) has set a torrid pace, publishing 63 of the 71 new datasets thus far in 2022, which together reflect 77 per cent growth in the year to date. Most remarkably, the country’s invasion in March has had no impact on the rate of growth. 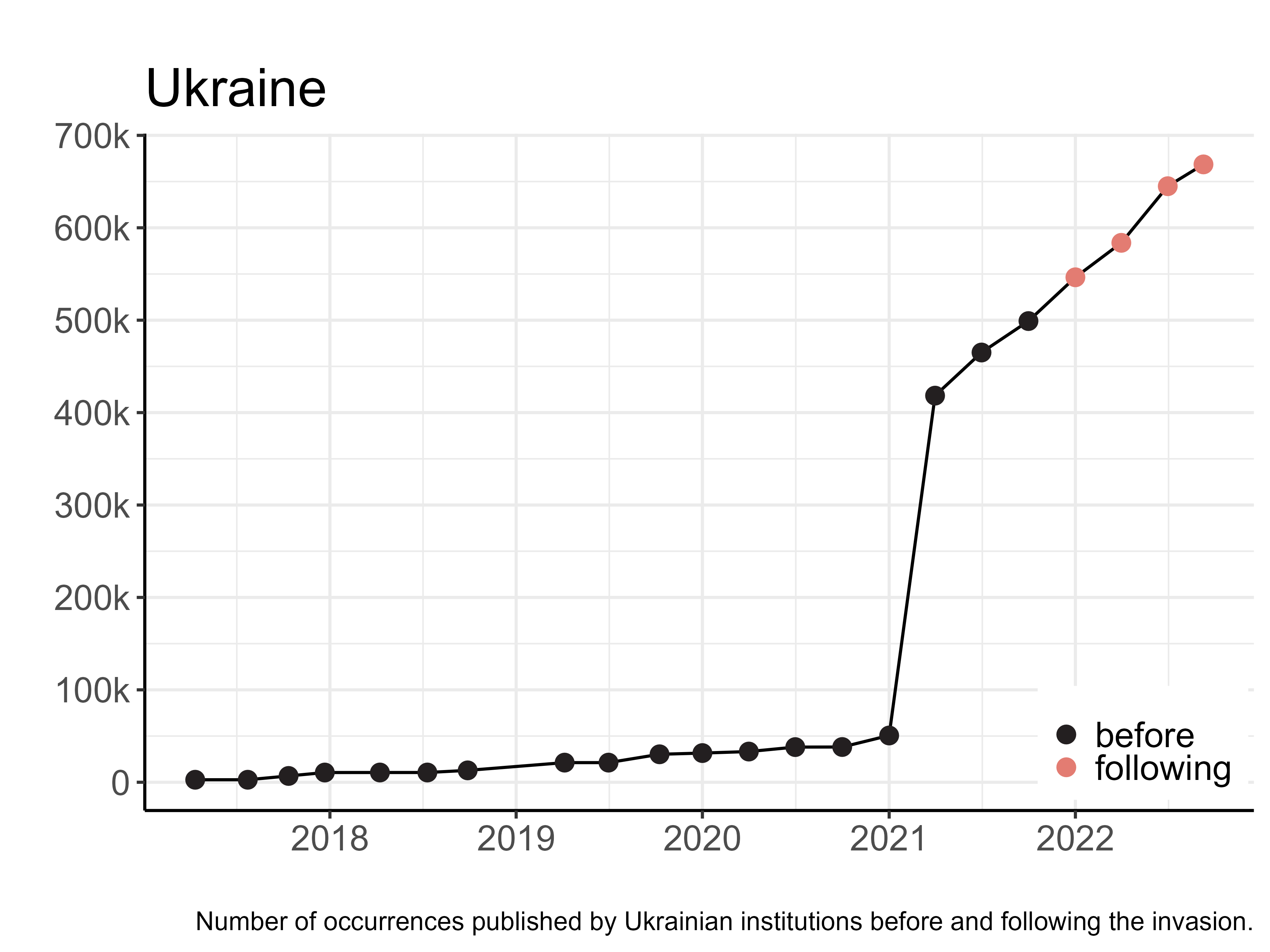 The expansion of Ukrainian biodiversity data publication activity has been nurtured by the country’s inclusion in BioDATA, an international project started in 2018 by the University of Oslo (UiO), with funding from the Norwegian Agency for International Cooperation and Quality Enhancement in Higher Education (DIKU) (now part of the Directorate for Higher Education and Skills, or HKDIR). The project aims to provide students in Eastern Europe, South Caucasus and Central Asia with practical skills related to international data infrastructures and standards.

A planned BioDATA training workshop in Ukraine had already been delayed due to the pandemic, and the war made rescheduling this as an in-person event impossible within the forseeable future. With strong demand from within Ukraine to proceed with the training, it took place as a virtual event in August, attracting 20 Master’s and PhD students with support from experienced Ukrainian mentors and an international team of instructors.

"The open biodiversity data community in Ukraine has grown substantially since 2019 when BioDATA launched, but eagerness sometimes exceeded the knowledge and technical skills of Ukrainian researchers," said Oleh Prylutskyi, associate professor of mycology and plant resistance at V. N. Karazin Kharkiv National University, and one of the local organizers of the BioDATA initiative in Ukraine. "BioDATA promises to be the huge driver for further advances in mobilizing biodiversity data in Ukraine, because we have now obtained more than 20 new well-trained specialists, each of whom can become a source of new growth."

"The invasion by the Russian Federation should not impede providing training in Ukraine," said Hugo de Boer, professor and research director at the UiO Natural History Museum and principal investigator on BioData. "It does, however, make it even more important to mobilize biodiversity data and provide opportunities for our motivated colleagues in Ukraine who find themselves at a difficult crossroads."

Programme leaders selected students to participate on the strength of applications outlining their background and motivation for taking the course. Now, with the online meetings over, attendees who successfully complete their final assignments will receive a certificate of attendance worth two university-course credits and a digital badge certifying their skills in biodiversity data mobilization. In the meantime, BioDATA is collaborating with NL BIF—the Netherlands Biodiversity Information Facility—on a small grants programme to support data mobilization from student projects in Ukraine.

The leadership provided by GBIF Norway through BioDATA has proven instrumental in expanding the boundaries of GBIF's international network into Northern Eurasia, as four countries with students involved in previous BioDATA training have joined the GBIF network as national participants: Belarus, Armenia, Uzbekistan and Tajikistan. GBIF Norway and the GBIF Secretariat expect to build on the achievements of the programme, with HKDIR having pledged funding to support its second phase beginning in 2022.