This feature is also published in the GBIF Science Review 2019, which highlights important and noteworthy examples of the use and reuse of GBIF-mediated data in research and policy.

In October 2018, the Intergovernmental Panel on Climate Change (IPCC) published its Special Report on Global Warming of 1.5 °C (SR15). Responding to an invitation from the countries that adopted the Paris Climate Agreement in 2015, the report aims to “strengthen the global response to the threat of climate change, sustainable development, and efforts to eradicate poverty.”

The IPCC SR15 seeks to provide governments with comprehensive, authoritative scientific advice on how environmental risk levels will change between our world and future ones in which the global mean temperature increases by 1.5°C and 2°C above pre-industrial levels. By clearly outlining the choices and trade-offs that decision-makers face, the report also provides them with practical guidance on what’s needed to demonstrate responsible political leadership around climate change.

Implications of global warming for people, economies and ecosystems. From figure SPM.2 in IPCC SR15: Summary for Policymakers*

Links between primary biodiversity data and high-level policy documents like SR15 often border on imperceptible, even in the best of circumstances. Comprehensive global assessments examine tens if not hundreds of thousands of scientific research articles, and climate change analyses must canvass an even more scientific, technical and socio-economic dimensions. Citations—much less data citations—refer to only a fraction of the massive bibliographies, making it nearly impossible to trace direct connections back to underlying data with any confidence.

Nearly impossible, that is. For the intrepid investigator who follows the trail of citations through the scenic distractions of supplementary materials, the link between the research that underpins SR15’s key biodiversity-related conclusions and data from the GBIF network is unmistakable. What’s more, the steady increase in the amount of GBIF-mediated data during the last decade forms a critical part of these policy-relevant findings.

In 2013, researchers Rachel Warren and Jeff Price from the University of East Anglia’s Tyndall Centre for Climate Change Research led a multi-author team that published an early, high-profile use of GBIF-mediated data in Nature Climate Change. The paper drew on records for nearly 50,000 plant and anmal species, seeking to understand how increases in global temperature could be expected to affect more common species. The findings forecasted drastic reductions in species’ geographic ranges while outlining how quick action to mitigate the impacts of climate change could reduce the scale of these losses and buy time for species to adapt.

Fast forward to 2018, when Warren and Price led investigations of a more refined question: how will limiting the increase in global temperature to 1.5°C rather than 2°C affect insects, vertebrates and plants? Writing this time in the journal Science, the authors analysed more than 385 million occurrence GBIF-mediated records for 105,501 species to find that limiting warming to 1.5°C as compared to 2°C would cut geographical range losses resulting from climate change in half. The supplementary materials explicitly acknowledge how important the increased availability of data from the GBIF network was to the research. 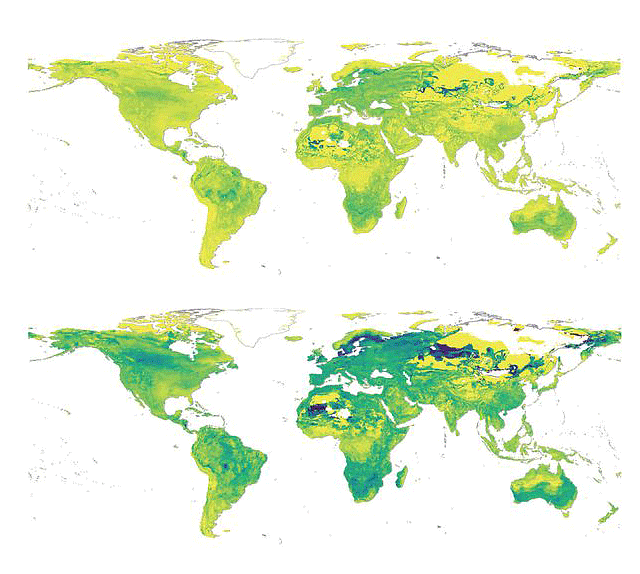 ‘Since our previous analysis in 2012, the [authors’] database has been updated and expanded to include nearly 70,000 more species of plants and animals.…Both updates to the GBIF database and increased spatial resolution enabled us to include thousands more species than were available in our earlier studies.’

In fact, this increase in data availability enabled the introduction of an entire class of animals excluded from the previous analysis—insects, 31,536 species of them. Their earlier omission was limiting, not only because of the role that 'the little things that run the world' (as E.O. Wilson once characterized them) play preserving critical ecosystem functions and services, but also because the authors found that ‘insects benefit most from constraining warming to 1.5°C rather than 2°C.’

SR15 draws on other research supported by the GBIF network, at least secondarily, like the dozen of the 131 model predictions reviewed in Urban’s 2015 meta-analysis that reported using GBIF-mediated data. But on the single page (p. 218) allocated to analysing ‘Changes in species range, abundance and extinction rates,’ SR15 refers to Warren et al. 2018 six times—for example, repeating the paper’s conclusion that limiting warming by 0.5°C could lead to a threefold reduction in the number of insect species facing extinction (defined as loss of more than half of geographic range) and halve the risk for plant and vertebrate species.

For institutions that share data through the GBIF network, the IPCC SR15 is more than a high-profile call to action. The practice of assigning DOIs to user downloads can help reveal the direct connection between policy-relevant scientific research and the underlying data. So when asked why they share their data, GBIF publishers of any of the 5,432 datasets cited in the download can unequivocally state: to contribute to critical policy-relevant science like the first global-scale assessment of climate change impacts on insects and the IPCC’s Special Report on Global Warming of 1.5 °C.

Warren et al. (2018) The projected effect on insects, vertebrates, and plants of limiting global warming to 1.5°C rather than 2°C