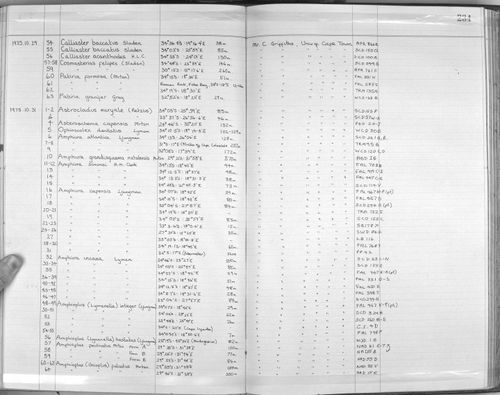 Remarks. This is the only the second time the species has been recorded since the type was collected off the Umvoti River, Natal, South Africa (Mortensen 1925). Sink et al. (2006) listed this species from Sodwana Bay in northern KwaZulu-Natal, and noted (p. 470) that it “ was commonly attached to the gorgonian Nicella dichotoma ”. Okanishi et al. (2013) described and illustrated the rediscovered holotype and three additional specimens collected from off Somalia and Madagascar. The present specimens are from the same general area, off the central coast of Mozambique. They align with the aforementioned descriptions. The disc is covered with granules, radial shields broad distally (Fig. 2 A, C), arms annulated proximally with two short rough-tipped spines (Fig. 2 B, D). The only variations noticed were the presence of two distinct sizes of granules on the aboral surface of the disc; those on the underside of the disc and arms are very fine. The arms are color-banded.