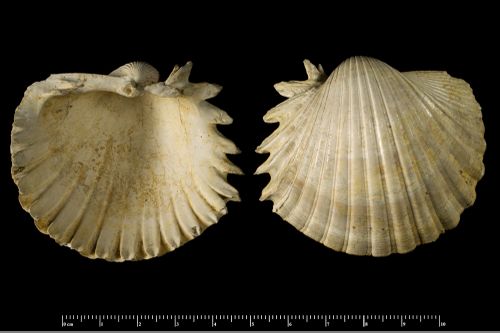 Nomenclatorial history. Bucardium grateloupianum n. sp. was first illustrated by Cossmann & Peyrot (1912: 115, pl. 22, figs 3 – 6) as Cardium (Ringicardium) grateloupi Mayer, 1866. They tried, though unsuccessfully, to clarify the species’ identity, already confused at that time (“ Cette espèce a donné lieu a plusieurs confusions ”). As observed by Magne (1950), Cardium grateloupi was proposed by Mayer (1866: 71) as a replacement name for “ Cardium hoernesianum Grateloup ” of Hörnes (1862: 183, pl. 27, figs. 1 a-c), from the Eggenburgian (Upper Miocene) of Austria, thought to be preoccupied by C. hoernesi Deshayes, 1858. This is very clear from Mayer’s comments: “ … je ferai remarquer que le C. Hörnesianum Grat. (Hörn., Foss. Mollusk. Von Wien, vol. II, p. 183, pl. XXVII, fig. 1) […] doit encore changer de nom, puisque le C. Hörnesi Desh. à la priorité de près d’un an ”. Hörnes (1862) and Schaffer (1919: 66) explained that Grateloup sent Cardium specimens to the Hofmineralienkabinett in Vienna (the modern Naturhistorisches Museum), one year before his death. This material, labelled as Cardium hoernesianum Grateloup sp. nov., from the Burdigalian yellowish falun at Léognan, south of Bordeaux, is deemed to be conspecific with C. grateloupianum n. sp. Grateloup also annotated that his new species had been confused with Cardium burdigalinum Lamarck, 1819. Actually, some material labelled as " Cardium hoernesianum Grateloup ", all from the area of Bordeaux, is present at NHMW (Fig. 3 A – F). One lot, consisting of two worn valves, almost lacking the posterior digitations (Fig. 3 E, F), is from Léognan and was acquired in 1860 (as can be inferred from the registration number), i. e. one year before Grateloup’s death in 1861 (Lesport et al. 2012). It could represent Grateloup’s original material, and their worn condition could explain why Hörnes (1862) applied Grateloup’s manuscript name to a different species (further discussed below), remarking that “ Die Wiener Exemplare gleichen vollkommen denen aus der Umgebung von Bordeaux, nur sind sie wie alle hiesigen Vorkommnisse verhältnissmässig grösser und dicker in der Schale ” (" The specimens from Vienna are completely identical to those from the Bordeaux area, but […] the shells are comparatively larger and thicker "). The correct authorship of C. hoernesianum should be then Hörnes, 1862, not Grateloup in Hörnes, given that Hörnes did not describe Grateloup's species, but a different one.

Distribution. In addition to Saint-Paul-lès-Dax and Mérignac, from where the type material comes, the study material is from Lèognan, Saucats and Salles, all well known fossiliferous localities in the Aquitaine basin (Folliot 1989). The outcrops in the areas of Lèognan and Saucats are of Burdigalian age, though some of the Saucats outcrops include Late Aquitanian beds, while the outcrops in the area of Salles are Serravallian (Poignant et al. 1997; Cahuzac & Cluzaud 1999; Cahuzac & Jannsen 2010). According to Cossmann & Peyrot (1912) and Magne (1950), this species is only known from Aquitanian and Burdigalian deposits. Most probably, the " Serravallian " material (NHMW) was mislabelled or its locality inaccurately recorded, considering that in some Miocene localities in SW France, the Burdigalian deposits are directly overlain by Serravallian beds (Poignant et al. 1997: fig. 5). The species was recently described as Cardium grateloupi by Lesport & Cahuzac (2005) from a rich molluscan assemblage of Early Burdigalian age at Martillac, south of Bordeaux. It is a shallow water assemblage of sandy substrate, comparable to the modern Sables Fins Bien Calibrés community, as defined in the Mediterranean by Pérès & Picard (1964). The living B. ringen s, a tropical species as indicated by its West African distribution, is probably the direct descent of B. grateloupianum n. sp., which evidently also had warm water preferences, as inferred from the palaeoclimatic and palaeogeographic characteristics of the Lower Miocene fauna of the Aquitaine basin (Lauriat- Rage et al. 1993; Lozouet 2014).

Etymology. The species is named after the French naturalist Jean-Pierre Sylvestre de Grateloup (1782 – 1861), who was the first to recognise and name this species in schedis. Comparison. The only species which Bucardium grateloupianum n. sp. surely deserves to be compared to is B. ringens (Fig. 1). In B. grateloupianum n. sp., the antero-dorsal margin is long, almost straight and only slightly sloping whereas it is shorter and distinctly sloping in B. ringens. The antero-dorsal area with fine radial ribs (Fig. 2 J) is much better defined in the new species, and the posterior digitations are coarser and less numerous with the dorsal one pointing upwards and extending above the umbo, in the large valves at least (Fig. 2 A – C, G, H). The radial sculpture follows the same pattern as in B. ringens, but in the new species the medial ribs are mainly symmetrically convex and only becoming asymmetrical and then ridged near the posterior margin. The crescentshaped growth striae on the posterior ribs are well distinct in B. ringens but ill-defined in the new species (Fig. 2 C). Bucardium grateloupianum n. sp. is slightly elongate antero-posteriorly, particular at larger size, instead of being almost equidimensional as B. ringens, and with a larger maximum size (slightly exceeding 60 mm in length). Some differences can be also seen in the hinge, which is straighter in the new species, with the posterior lateral tooth in the right valve further away from the cardinal teeth than in B. ringens (Fig. 2 F, I). Crenulation on the lunular flap is generally coarser and better developed in the new species (Fig. 2 K), but this character seems rather variable. In B. ringens, right and left digitations touch each other at least in part (Fig. 1 E) whereas the posterior gape in B. grateloupianum n. sp. seems wider, with digitations not touching each other. Variations mainly regard the length and number of posterior digitations: they are typically well developed, up to six, but specimens with few, short digitations (3 – 4) (Fig. 3 A – C) and even almost mutic specimens are known (Fig. 3 D).