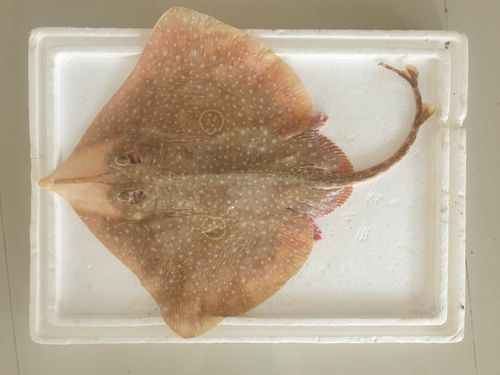 Remarks. A substantial body of literature has been assembled on the clasper morphology of skates, but no comprehensive coverage of all extant genera has been published and details of the adult clasper are unknown for some genera (e. g. Pseudoraja). Orbiraja resembles Okamejei in external morphology, but members of these genera differ from each other in clasper morphology, squamation and in their molecular sequences. In Orbiraja there are 3 well-developed rows of thorns along the middle of the tail and these are positioned unusually close together and well away from the lateral thorn rows. Some Okamejei (e. g. O. kenojei) have three prominent thorn rows along the median tail but these are well separated (lateral-most rows usually dorsolateral in position). Okamejei species also have dark-edged pores on the ventral head compared to not being dark-edged in Orbiraja. The claspers of the Okamejei species have a component funnel (absent in Orbiraja and Okamejei ornata Weigmann, Stehmann & Thiel) and the ventral terminal cartilage is claw shaped (not claw-shaped in Orbiraja). Neither Okamejei nor the other rostrorajin genera (Malacoraja, Neoraja and Rostroraja) are known to have an accessory terminal 3 cartilage (arising from the disto-medial margin of the accessory terminal 2 cartilage); an accessory terminal 3 cartilage is present in the ‘ amphi-American assemblage’ but is located on the disto-lateral extension of the dorsal marginal cartilage (J. McEachran, pers comm.). The position of the spiracles relative to the eyeball in Orbiraja is somewhat unusual within skates (placed more posteriorly) and needs further exploration. The orbit + spiracle length is 1.7 – 2.0 times the orbit diameter in Orbiraja jensenae versus 1.2 – l. 6 times in several rajin skates examined (PL, unpubl.).

Etymology. Epithet based on the Latin word orbis (meaning circle) with reference to the paired, ring-like pectoral-fin ocelli in all three nominal species. Vernacular name: Ring Skates. Species. Orbiraja jensenae (Last & Lim, 2010) and O. powelli (Alcock, 1898). The status of O. philipi (Lloyd, 1906) needs to be reassessed as it has been considered a possible junior synonym of O. powelli (Weigmann et al., 2015; Weigmann, 2016). New material of O. powelli collected off Myanmar suggests that this species is morphologically variable, including the shape of the pectoral marking. Lloyd’s original figure of the type has the pectoral marking placed more posteriorly on the disc than in typical O. powelli. Preliminary investigations indicate that an additional, un-named species of Orbiraja occurs off Indonesia.