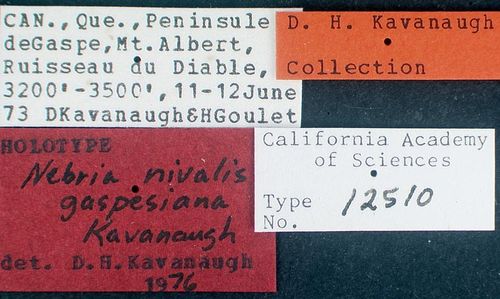 Macrohabitat: Midlands to uplands, alpine zone, 910- 1580 meters altitude. Microhabitat: On banks of cold rivers and brooks and close to snowfields on open bare ground that is wet and stony. Dispersal abilities: Macropterous, probably capable of flight. Seasonal occurrence: Adults have been found in June- September; copulating pairs in late July; teneral adults in June- August. Behavior: Adults are nocturnal, carnivorous, taking cover in the day under stones. Hibernation takes place probably both as an adult and larva. (Erwin, 2001; Kavanaugh, 1979 & 1985 & (in litt.); Larochelle & Lariviere, 2003)

Notes: Gidaspow (1959) states that she did not see Hatch's type, nor could she make much of the description. I [Erwin] have compared the Holotype of C. striatus (now in NMNH) with Schaeffer's type of C. irregulare (also in NMNH) and they represent the same species.